History of the Bug Club 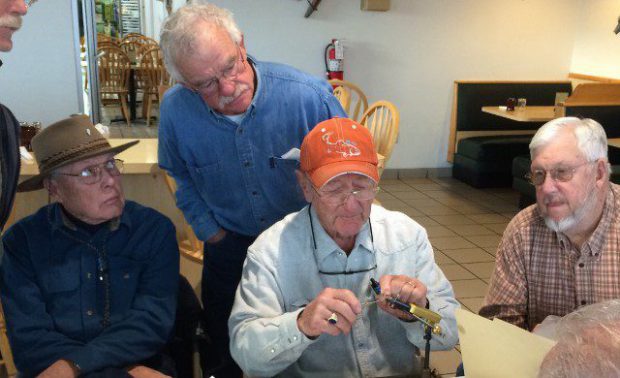 The Bug Club through the Years by Buck Goodrich

In the 1990s, some Snake River Cutthroats fly tiers wanted to improve their tying skills, so they formed a small group. To improve these skills, the group decided to tackle Atlantic salmon flies, the most difficult flies to tie and requiring certain techniques uncommon in tying trout flies. The group obtained Marvin Nolte, one of the top Atlantic salmon fly “dresser” in the world, to present a one-day workshop in “dressing” these flies. Afterwards, winter meetings, featuring donuts and coffee, were held every other Saturday from December through March at the Idaho Falls Library. Gary Grant led the group in Atlantic salmon fly “dressing.” We named the group “The Rocky Mountain Fly Tiers Guild.”

In a few years participation diminished, so Bill Cathrae suggested tying regular trout flies to gain casual fly tier participation with the objective of improving skills and learning new patterns. Bill also obtained Dad’s Restaurant (Frontier Pies) approval to use an upstairs room and to serve breakfast and coffee. He also suggested that we change the name to a less intimidating “The Bug Club.” As a result of Bill’s actions, participation rapidly increased.

The Club met at Dad’s until their restaurant closed in 2014. Then it moved to Shari’s restaurant in Idaho Falls. In 2017 the Club moved to the Hilton Garden Inn to meet every other Saturday, December through March.

The goal of the Bug Club is to present a forum through which tiers improve their techniques, learn new patterns and, of course, enjoy camaraderie with fellow tiers. Tying subjects are offered by attendees, and meetings are open to anyone wishing to take part. Breakfast, if desired, is at 8 am, and tying starts at 9 am. The Bug Club encourages you to bring fly tying gear and tie, but observing is also welcome. In 2018 January, meetings are on the 13th and 27th. We would be pleased if you joined us!

Posted On February 15, 2018 ~ 0 Comments
Come on down to experience Matt McHargue's tying expertise and have a frosty beverage. Also, Lewis and Clark Brewing will be there doing a Brewery…

Posted On January 24, 2018 ~ 0 Comments
Fly of the Month - Syl's Midge Syl Nemes, of soft hackle fame, contributed a pattern for every aquatic insect that completes its life cycle…

History of the Bug Club

Posted On January 24, 2018 ~ 0 Comments
The Bug Club through the Years by Buck Goodrich In the 1990s, some Snake River Cutthroats fly tiers wanted to improve their tying skills, so…