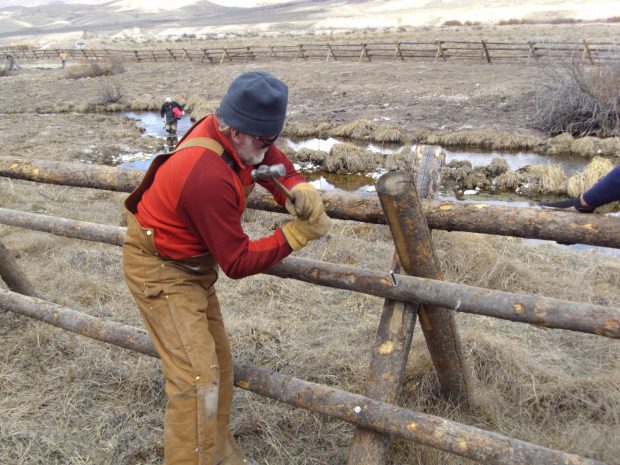 The Snake River Cutthroats completed a fencing project on the Amonson Ranch at Leadore, which completed a project begun in 2006 by then Cutthroat President, Karl Amonson. The April 30th project also marked the 23rd consecutive year for the Cutthroats working on projects in Salmon River drainage. Volunteers built 3,000 feet of jack fence to protect 1,500 feet of restored stream bed on Little Springs Creek. This is prime spawning habitat for salmon coming up the Lemhi River and several spawning redds were found earlier this spring. As you can see in the photographs below that while the calendar indicated spring, the weather did not. Somewhere around 38 volunteers, mostly from the Cutthroats, participated and are listed below. Hopefully, I didn’t miss anyone. I would like to thank everyone who volunteered their time, mileage, tools, generators, 4-wheelers, etc. that made this project successful. In particular it was great to have the Sho-Ban Tribe crew helping, along with Ron Troy from the Nature Conservancy and some of his friends. I would like to thank Jerry Meyers, Trout Unlimited, and the Idaho Fish and Game Department for putting this project together. There are a lot of players in a project like this. I would be remiss if I didn’t thank Dan Garcia, fisheries biologist with the Salmon-Challis National Forest, for allowing us to use the Forest Service facilities at Leadore again this year. The Forest Service also helps cover some of our food costs and again provided volunteers with a project commemorative baseball cap. 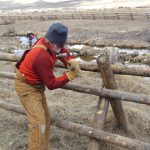 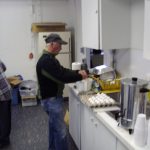 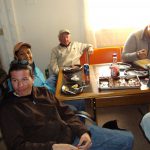 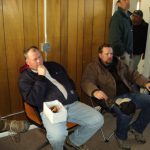 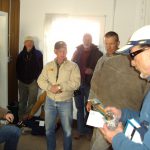 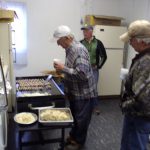 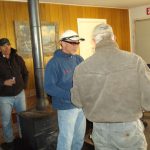 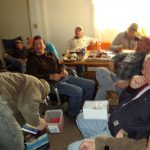 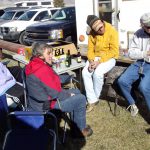 The Snake River Cutthroats is a very active chapter in terms of raising money for conservation (the Expo) and in helping with on-the-ground projects. We can always use more help, however. Rather than waiting to be asked to help, just volunteer.

Posted On May 30, 2018 ~ 0 Comments
On May 15 the Snake River Cutthroats held their annual  beginning and intermediate fly casting clinic at Tautphus Park. John Rivera, the Lead Casting Instructor, along…

Posted On February 10, 2019 ~ 0 Comments
Check out the 2019 EXPO website for the latest information including Workshops, Fly Tyers, Banquet Packages, etc. Our Featured Guest is Charlie Craven. He will…

Posted On March 11, 2018 ~ 0 Comments
March Tie-One-On Tuesday featuring Brandon Morrison. Brandon will be tying streamers and carp flies. He will also be discussing carp fishing on the Snake…