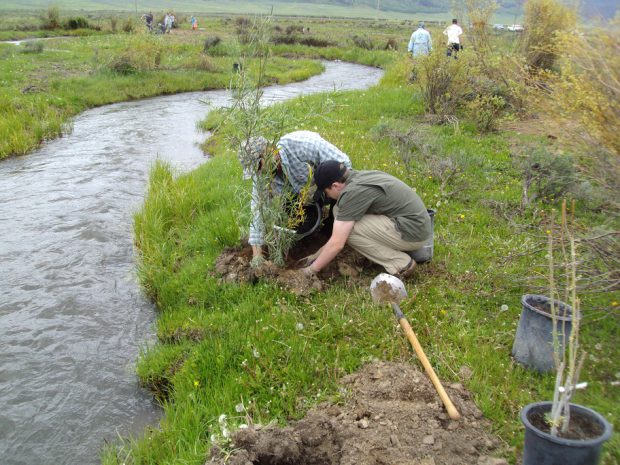 Late May and early June were a busy time for SRC conservation projects. There was the traditional spring project with the Salmon-Challis National Forest held this year the last weekend of May (see separate write-up) as well as a willow planting by the SRC Youth Club on the first weekend of June. Scheduling back-to-back weekends was more by default than by design.

As many of you are aware, Matt Woodard’s efforts for Trout Unlimited have shifted from the South Fork to the Blackfoot River. Part of the effort on the Blackfoot involved rebuilding 2,300 feet of Sheep Creek on the upper Blackfoot last year. Like many streams in the west, Sheep Creek had been straightened decades ago and basically turned into a ditch for irrigation. The meandering stream has been rebuilt, but was in need of some additional vegetation to help stabilize banks and ultimately to provide shade. Cattle will be excluded from the area for five years to allow vegetation to re-establish. 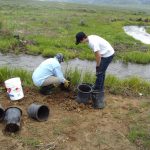 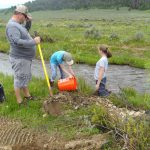 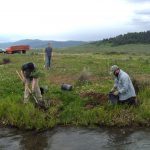 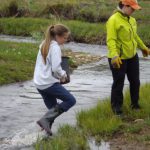 The Cutthroats purchased 72 potted willow plants from North Fork Native Plants in Rexburg to plant along Sheep Creek – more Expo dollars at work for conservation. Trout Unlimited had Rockin T Construction, the company that rebuilt the stream, use a track hoe with an auger to dig the holes to speed up the planting process. Matt borrowed a grain truck from the family farm to haul the willows. The high sides protected the willows on their 2-hour ride to the planting site. While most of the activities for the youth group focus more on fishing and fun, the youth felt it was important to put some effort into conservation as well. But work can also be fun. I think the pictures speak for themselves.  Distributing the willows along the creek was the first order of business. Then it was time to break out the shovels to fill the hole to the appropriate level, insert the willow and fill the hole. Water was added to make sure the soil settled so there wouldn’t be air pockets that would hurt the survival of the willows. Many willing hands allowed us to finish the project quickly.

There were nine youth and nine adults involved with the project. Thanks to the parents who provided transportation and to the parents who couldn’t be there but allowed their children to participate in the project. The youth group included: Anabel (13) and Asher Assante (8), Ian St. Michel (12), Josh (17) and Shea Crain (14), Olivia (12) and Tara Wootan (6), Shai Cunningham (15), and Payton Stanger (15). Adults included: Christina and Mike Assante, Curtis St. Michel, Tim and Christi Crain, Shane Wootan, Matt Woodard, Jeff Armstrong and Paul Patterson. Unfortunately, the rain that held off all morning allowing us to plant the willows pre-empted out hoped for group photo.

Posted On February 7, 2018 ~ 0 Comments
by Paul Patterson Late May and early June were a busy time for SRC conservation projects. There was the traditional spring project with the Salmon-Challis…

Posted On April 1, 2022 ~ 0 Comments
Upcoming service opportunity - Forest Service has asked for some help with the completion of the fence our club helped with last spring along Rainey…

Posted On January 25, 2018 ~ 0 Comments
For the 29th consecutive year the Snake River Cutthroats conducted a springtime conservation project in the Salmon/Lemhi River drainage. This year’s project was on Canyon…