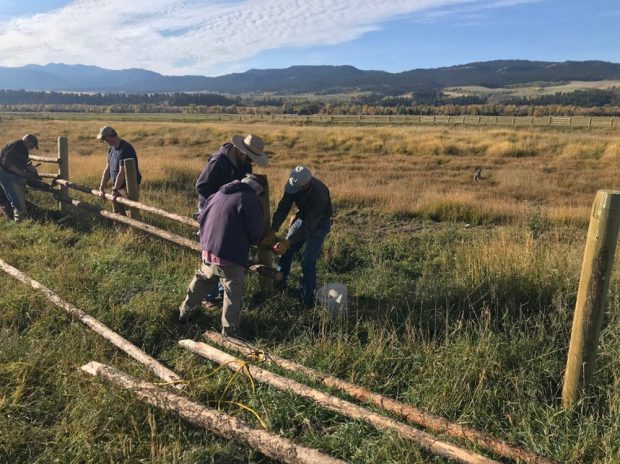 October 8 Fence Building  Eight hearty volunteers showed up bright and early to finish the remaining section of fencing on Third Creek and its headwater springs in Swan Valley. Fencing on this section started in the Spring of 2022 with extensive work done by Snake River Cutthroats continuing through this fall. Third Creek feeds into Rainey Creek and has been the site of extensive protection and remediation. The Henry’s Fork Snake River Initiative has done work to reestablish the creek’s historic channel downstream close to Rainey Creek. Early observations reveal that this work will benefit Cutthroat populations in the South Fork. The fencing effort on Steve Griffel’s property will reduce sediment load to the creek and further enhance the ability of spring creek to be a productive nursery to the South Fork. Thanks to Arn Berglund, Paul Paterson, Matt Woodard, Steve Moss, Dan Smith, Lee Morse and a prospective new member Jeff Gee on this final outing. This final fence building outing by the SRC fence builders ended 5 outings of building 3 rail pole fence on Third Creek and Rainey Creek. Crews built over 6,000 ft of fence. 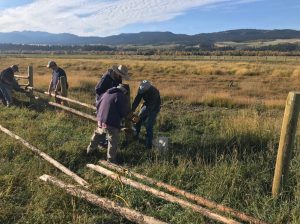 October 29 Hwy 26 Adopt a Highway Cleanup Semi-annual roadside cleanup went off without a hitch.  Thank you to the following volunteers who were there: Arn Berglund, Lee Morse, Hal Gordon, Susan and Pat Marushia and Brian King. Please be watching for the spring cleanup.

Rainey Creek Screens  Another year of screen and belt maintenance has been completed. Most of the ditch diversions on Rainey creek have had either belts or drum screens installed to prevent fish from entering the irrigation ditches. Matt Woodard working with Trout Unlimited was instrumental through the years establishing these protections. The Club has taken on the maintenance as our contribution to assist landowners who are cooperating in this endeavor. SRC received an Embrace a Stream grant to replace a bubbler screen with another drum screen on another irrigation ditch coming off Rainey Creek. Special Thanks to Matt Woodard and Arn Berglund taking care of the seasonal installation and removal of the Belt Screens, and to Andy Bosworth for coordinating volunteers. Volunteers this season included Myles Pawlaczyk, Rob Knox, Rick Carosone and Leslie Soderquist. Watch for news in the spring if you are interested in helping with this endeavor. Generally, the screens and belts are cleaned of leaves and woody debris two to three times a month. The season runs from April to October.

Posted On February 7, 2018 ~ 0 Comments
The Snake River Cutthroats completed one major conservation project in 2012. The May 19th project was on the Tonsmeire Ranch in Lemhi County, which has…