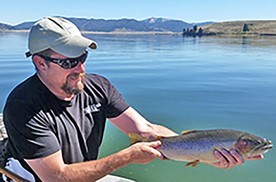 Todd Lanning will be doing a presentation on the fishing waters of the greater Yellowstone area and successful patterns for these waters. Rivers discussed will include the Madison, Yellowstone, Henry’s Fork, South Fork of the Snake and others.

Todd was born and raised in Idaho to a hard-working family of anglers. Some of his earliest memories were catching trout with his grandfather in and around the Cascade area of Idaho. He also enjoyed tagging along with his father on the Middle Fork of the Boise River. With his family background he was forever hooked on fly fishing.

From an early age he knew there were two things he wanted to do- follow in his granddad’s footsteps and be a United States Marine and then become a fly fishing guide. From 1991 to 1995 he held the title of United States Marine and, after being honorably discharged in 1996, he moved to Ketchum Idaho and went to work for Headwaters Fly Fishing in Ketchum. Later he moved to Idaho Falls where he worked for a local outfitter and later managed the fishing department at Sportsman’s Warehouse. When Shaun Lawson was the manager/outfitter at South Fork Outfitters he hired Todd as his assistant manager. Todd moved on after Shaun relocated to Bozeman as a Program Director for Yellow Dog Fly Fishing.

Through a stroke of fortune Todd joined the Henry’s Fork Anglers management team. He has two sons- Grant and Grayson and a daughter Georgia.