Join us at the Fairbridge Inn and Suites in Idaho Falls for an informative program on fishing Pyramid Lake for giant Lahontan cutthroat trout. 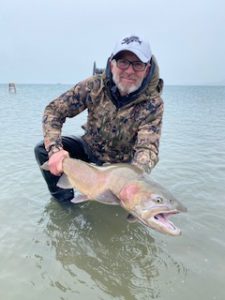 Darren shared this great video- The Lost Salmon, have a look!

Darren Huntsman is as “local” as one can be, growing up on the banks of the Snake River just north of Shelley.  Darren was lucky to have a father who was addicted to the outdoors, and Darren was his shadow on countless fishing excursions, including annual trips chasing Chinook salmon down below the confluence of Bear Valley and Marsh Creeks that form the Middle Fork of the Salmon River.  Darren began fly fishing and tying career before high school age, and used cash paid from Ralph Alexander at the old Hackle Den to finance his flying fishing habits.  When Idaho lost its opportunity to fish for Chinook salmon in Idaho, Darren began guiding, and then hosting trips into Alaska.  After 22 years of spending a good chunk of his summers in Alaska chasing Kings and giant Rainbows, it’s amazing he still has a wife.  The Henry’s Fork has been a long time “piece of Heaven” for Darren, and several of the river’s lodges and cabins carry Darren’s signature in the form of custom stone work.  Most of the work during those summers revolved around the hatch timing on the Henry’s Fork. However, Darren’s true passion is fishing still waters with his fly rod.  The “rubber hatch” revolution of float tubes in the 70’s and 80’s is what kindled a burning fire to master the still waters with a fly.  Now each summer you’ll find him on Henry’s Lake, the late fall on Chesterfield, Daniels, and other southern still waters.  Wintertime means Pyramid Lake!  Darren is the owner of STLWTR Fishing Company, whose main goals are to educate fly fishermen what great angling opportunities still waters provide.